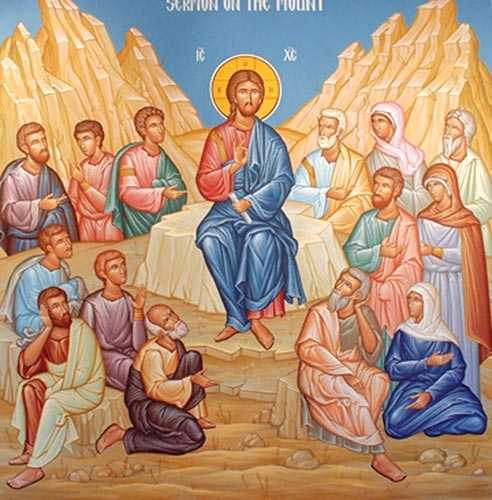 The Christian message is one of Good News for all mankind, but over the centuries it has been misunderstood and misrepresented. Orthodox Christianity has preserved the faith which was taught by the Apostles, the followers of Jesus Christ, and this faith remains Good News for all who receive it with hope. The beginning of the Gospel of St Mark, and Gospel means Good News, says this…

This is the Good News about Jesus Christ, the Son of God.

This brief introduction to Christianity will explain how it is that what we believe and teach as Orthodox Christians is truly Good News for all.

Orthodox Christians believe that above and before all else the God we worship is a God of love who invites us to enter into a personal relationship with him. He does not just do acts of love, but he is love in his very essence. This quality of love is described in the Christian insistence that God is a Trinity. We mean that there are three Persons in God who nevertheless remains one God, and that these three Persons eternally express a divine love towards each other. Our relationship with God, the invitation he extends to us all, is a participation in this life of love.

It was out of love that we believe God created the universe and our world. Science agrees that there was a beginning to our universe, and an increasing number of scientists, faced with the incredible complexity of the natural world, believe that there is an intelligence behind it. Science can only tell us about things within the universe and can say nothing at all about God who is not part of the created order. Nevertheless, scientists have discovered that nature is so complicated that it is impossible for it to have developed as we see it by purely random chance. Orthodox Christians understand our very existence as an expression of God’s love, and his desire to share his love with mankind.

Indeed, we believe that the universe was created by God, in whatever way he used, so that he might enter into a relationship with mankind. The Bible says that we are made in God’s image, made like him in many ways, intended to experience unity with him. But we also learn that Adam and Eve, representing all of mankind as our ancestors, chose to reject God. He asked one thing of them, that they not eat the fruit of one tree. But in being disobedient they created a division between God and mankind. Being separated from God had consequences.

Orthodox Christianity teaches that when Adam and Eve disobeyed God, or sinned, they lost the presence of God within them, the Holy Spirit, and they were suddenly aware of their mortality. This is the situation in which we all find ourselves. We are born mortal. We will all have an experience of death, and we see death inescapably around us. This was not God’s intention for mankind. We are also born without a relationship with God, a relationship in which God gives us his own life by the presence of the Holy Spirit within us. This loss of relationship with God, and the lack of the indwelling Holy Spirit leads to all the problems we experience as individuals and societies. We are not living that authentic human life which God created us to enjoy, and we cannot become authentically human while we remain separated from God.

Some have said that the evil and suffering in the world means that there cannot be a God. But three truths suggest that this is not the case. The first is that a great deal of suffering in the world is due entirely to human activity. There is enough food to feed all, for instance. Is God to blame that the resources of the world are not shared? Many die from war and violence but this is caused by human greed and envy. Others suffer from diseases that could be eradicated if humans had the willingness to do so, while others suffer diseases caused by the human pollution of our environment. Is that also God’s fault? The second truth is that a world in which it was impossible for people to do any evil would be a world in which it was impossible to be human, since every one of us would have to be controlled like a biological robot to prevent us thinking, doing or causing harm to another. We would not be human. And thirdly, the fact that we may come to harm requires us to become mature, and the development of maturity requires responsibility. I will come to harm if I fall off a cliff or if I put my hand in a flame. But mankind must also be responsible for where we build towns and cities, and where we place nuclear reactors – in Japan they were placed in danger of earthquake and tidal waves, and how we design roads and bridges, and all manner of other aspects of society. If we remove all of these things that are in our human control we would discover that most of the suffering in the world would be eradicated. For the rest, it is necessary to say that for those small number of cases that seem outside of any human involvement at all, we must say only that the God we have come to know is good, and the complex network of causes and consequences in the universe is more than we can understand.

The Orthodox Christian Good News or Gospel is that God was not content to let mankind drift away into a life of confusion and separation from himself. Even at the beginning of things he determined that he would make a way back for mankind into relationship with him. But it was not enough just to say that the disobedience of Adam and Eve, and of each one of us, didn’t matter. It does matter. Our free choice matters. It was necessary for him to find a way in which another man, another representative human being, could restore what had been lost by the same use of a free will, but in obedience.

God is by his very unchanging nature both absolute love and entirely righteous. In his love he himself became man. Orthodox Christianity teaches that God the Son, one of the Holy Trinity became a man, and was born as an infant, just as we are, while remaining God. We believe that Jesus, the miracle working teacher who died and rose from death is God himself become man. He became man so that in love he could live the holy and obedient life that is beyond us all, however much we try, and bring mankind back to a relationship with God.

Jesus Christ is truly man, but not only a man. He is God and man at the same time, without confusion but in a real union of divinity and humanity. In his life we see the love of God expressed, and especially towards the vulnerable, the poor and those in need. It was the self-righteous, those who thought that they were already fine that he had nothing to say to. In his life we see a holy man given over entirely to selfless service of others and doing the will of God in obedience. He had time for those who knew they were not perfect, and those who had made a mess of their lives. He healed the sick, and raised the dead. Those who knew him best came to understand that he was no ordinary man, but God himself.

It is especially in his death that Jesus Christ is known even today. Orthodox Christianity teaches us that his death, nailed to a cross, was not an unfortunate accident. The consequence of Adam and Eve’s disobedience was that mankind experienced mortality, and death became the experience of us all. To turn away from God, who is life, is to choose death. As the man Jesus, God allowed himself to be taken by men, by those whom he had created in love, and to executed as a criminal even though he had done no wrong. He experienced our death, the death which is the consequence of sin and which Adam and Eve had introduced into the world through their disobedience.

But it was for life and to save mankind from death that God had become man. He truly died. His body was placed in a tomb, and his spirit descended into the place where the souls of the departed are waiting. He had lived an entirely holy and obedient life, and therefore he did not deserve the experience of death. And being God he was himself life. He bore the death which mankind has deserved because of our turning away from God, and in his own humanity he burst forth from death by his own power, by his own divine life, and was resurrected from death. He did not appear as a ghost or a disembodied spirit, but he came back from being really dead and lived again.

Why does that matter to us? It matters because Orthodox Christianity teaches us that having experienced death as a man, and being resurrected as a man, the consequences of the disobedience of Adam and Eve have been dealt with once and for all in a way that expresses both the love and the righteousness of God. Representing all of mankind, in Christ we have died and been restored to life. He took our place and experienced death so that we might experience a resurrection ourselves.

If God has created the universe so that men and women could experience life in union with him, then through the death and resurrection of God become man, Jesus Christ, this experience becomes not only possible, but the entire purpose of Christianity. Orthodox Christianity is not about pleasing an angry God. It is not about earning enough points to get to heaven. It is entirely about experiencing the authentic human life in union with God himself through a personal encounter by the Holy Spirit and in selfless service to others.

Orthodox Christianity is a preparation for the life to come. A life in which all those who have been united with God in this life will live with him in eternity in a renewed universe and with resurrected bodies. To be human is to be both body and spirit, and it is God’s intention from the beginning that men and women of body and spirit should experience life with him. But the life to come is a life to be experienced now. Those who have committed themselves to God in Orthodox Christianity have begun to participate in union with God already.

How do we begin the journey of union with God as an Orthodox Christian? It begins with a recognition that we are unable to save ourselves, and that we also, though deserving to be condemned because of our wrong behaviour, thoughts and attitudes, might find true life and abundant life with God. It requires us to place our faith in God, to trust him and believe that he has already shown his love for us in becoming man, in experiencing the death that disobedience brought into the world, and in rising from death so that we might also live life fully as we are united to him. And as Jesus Christ himself taught, and his first followers practiced, we must be baptised into the Orthodox Church and receive the anointing with oil, not as empty rituals, but because in going into the water of baptism God truly grants a new birth, a new start to our life in union with Jesus Christ, and in being anointed with oil God truly grants us the divine presence of the Holy Spirit within us, who becomes an inner source of life and love that sustains our journey into union with God.