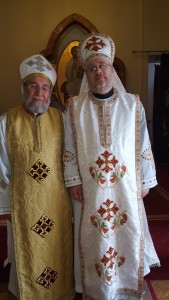 Over the weekend of Friday 2nd to Monday 5th October, Father Peter Farrington stayed in Staffordshire so that he could engage in several activities with the Coptic Orthodox Community of St Chad. In the morning he had celebrated the Liturgy of St Basil with Father Shenouda at the Coptic Centre in Stevenage, and then held the first of what will be a regular monthly meeting with His Grace Bishop Angaelos, now the local Coptic Orthodox Bishop providing oversight of his service. Father Peter and the missions under his care are transitioning from the use of the Liturgy of St James to the Coptic Liturgy of St Basil and every opportunity to celebrate the Liturgy and increase his experience is most welcome.

On Friday afternoon, Father Peter drove up to Staffordshire. He had arranged to stay in a small cottage on the edge of the Peak District National Park, only a few miles from the shrine of St Bertram, an early Anglo-Saxon saint. The cottage proved to be a useful location for retreat and preparation of materials for the services of the visit. It was a little one bedroom, converted farm building, right on the edge of the National Park, but on a main road that made travel over to Stoke very convenient.

The cottage provided an opportunity for Father Peter to prepare his homily for the Liturgy of the next morning, and to bake the breads, and read through the Liturgy of St Basil one more time. On the Saturday morning the Coptic Orthodox Community of St Chad gathered together in the Anglican Church of St Paul in Burslem, Stoke on Trent, and the very first Liturgy of St Basil was celebrated as part of the process of integration into the life and tradition of the Coptic Orthodox Church. Part of the missionary effort in the three missions in which the St George Orthodox Ministry is working is to discover what it means to be both genuinely British and authentically members of the Orthodox Church within the Coptic Orthodox Tradition.

The Coptic Orthodox Community of St Chad were very pleased to be able to pray the Liturgy of St Basil for the first time. There will certainly be an intensive process of learning more of the hymns and chants in the English language. But the Liturgy was celebrated reverently, and in order, and with great enjoyment by all. After the Liturgy those attending were able to share in food and conversation. Some had travelled two hours to be present on this special occasion. 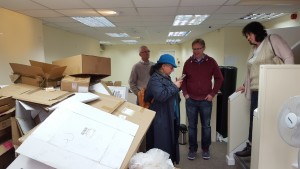 After the Liturgy some of the members, with Father Peter Farrington, walked into the local town centre of Burslem. A community hub project is being developed in the centre of the town, planning to be active for the period before Christmas and the Coptic Orthodox Community of St Chad wanted to investigate if they could provide an Orthodox presence in the heart of the town at this important period of the year. The visit was very encouraging and the Community of St Chad are working with those organising and developing this project to consider how we could participate. 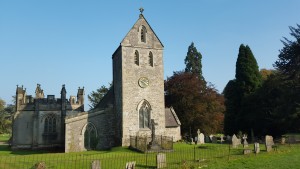 After this encouraging afternoon, Father Peter drove back to into the countryside and made the first of three visits to the Tomb of St Bertram which is still present in the remote village of Ilam, just a few miles from his cottage. St Bertram was an early Anglo-Saxon saint, of noble family, who became a hermit in this very isolated location overlooking a fast flowing river. There is a great sense of sanctity in this place, and it is possible to sit in the small chapel with the tomb of St Bertram, and find an hour or so passing very quickly. During these visits Father Peter prayed for all those who had asked for his prayer, and all those known to him with needs, and for the blessing of St Bertram on the Coptic Orthodox missionary work in Stoke. 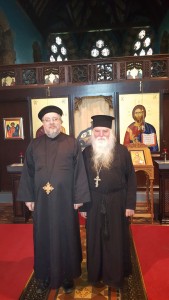 On Sunday morning Father Peter had been invited to attend the Liturgy of the Antiochian Orthodox Community in Stoke as a guest. The community worships in an Anglican Church, and the service was the Liturgy of St John Chrysostom, prayed in English and supported by an excellent choir. Father Peter was made to feel very welcome, and there are close and warm relations of friendship and fellowship between the Antiochian and Coptic Orthodox communities in Stoke. The Antiochian priest is Father Samuel Carter, who has always been kind and supportive of the members of the Coptic Orthodox Community of St Chad.

After the Liturgy, Father Peter stayed to have some coffee and conversation with Father Samuel and members of his congregation. He then decided to head back to Ilam and the tomb of St Bertram. It is such a wonderful, peaceful and spiritual place, and on Sunday was rather quieter than it had been on Saturday. Father Peter sat in the quiet of the shrine chapel for an hour or so. Time passes very easily there. Then he returned to the little cottage to spend time in preparation for the study evening which had been organised for Monday evening in Burslem, Stoke on Trent. 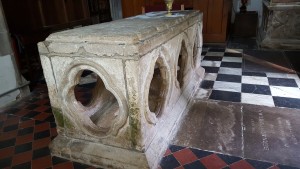 The weather had turned rather wet on Monday morning. After cleaning and tidying the cottage, and packing up all of his things, Father Peter Farrington could not resist returning one last time to Ilam and the tomb of St Bertram. He prayed there again, asking for the intercession of the saint for all those involved in the Coptic Orthodox mission in Stoke. It was difficult to leave the hidden valley of Dovedale and set off towards Stoke again.

Father Peter had arranged to meet some of the Coptic Orthodox Community of St Chad at the Museum in Stoke, and when they visited the museum they were able to see the Staffordshire Hoard, a collection of Anglo-Saxon gold items that had been found in the area. After this, Father Peter shared in some food with more members of the Community, and then led the Orthodox Study in the Anglican Church of St Paul. On this occasion the study was considering the question: What is a Christian? There was a very good conversational study based on passages from the Scriptures and the early Church Fathers, which everyone present enjoyed and from which we learned much.

After the study on Monday evening Father Peter set off on the journey back to Kent, reaching home in the early hours of Tuesday evening, and looking forward to the next meeting in Stoke.