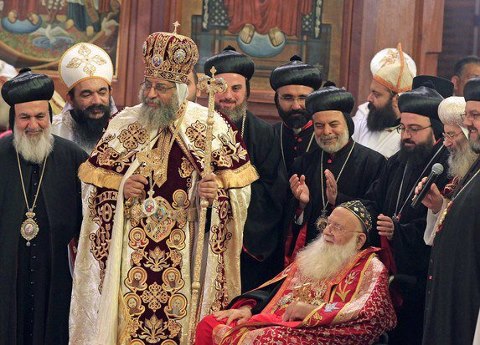 When I was an evangelical it was customary for some who thought they were cool to respond to the question, What Church do you belong to? with the answer, I’m just a Christian! Sure, I knew what they meant. But the question mattered. I was asking which community or congregation they belonged to. I was asking what collection of beliefs and practices they were likely to embrace. It actually helped to know where they usually attended Church on a Sunday. This was because despite the implication that there was one Church to which everyone who loved Jesus belonged, in fact there were so many significant doctrinal and spiritual differences between groups of Evangelicals and other Protestants that saying we were one Church was almost meaningless.

Some of my friends believed that speaking in tongues was absolutely necessary to be a Christian. Others thought that it was a sign of demonic possession. How could these views be brought to agreement? Some believed that all Church leaders should be ordained, others did not believe in a formal Church leadership at all. Some believed women should be entirely silent, others opened all areas of ministry to them. Some had a tradition going back centuries, others had only developed their guiding principles in the last decade. Some believed the Church had fallen into apostasy at the time of the Apostles, others didn’t think that there was any authority in the Apostolic way of doing things in any case. Even in relation to important doctrinal and scriptural matters there were differences I had to navigate among my friends and those I met, which could never be resolved. Some believed that Jesus Christ was only a man, and that God the Word had ceased to be divine when he was conceived of the Virgin Mary and the Holy Spirit. Others thought that the writings of St Paul were only an expression of his opinions and could be ignored.

Why am I describing some of these differences? It is not to criticise Evangelicalism and Protestantism, though it is estimated that there are 40,000 different Protestant groups with different beliefs, practices, spirituality and organisation. It is because when as an Evangelical we said that we were just Christians it really wasn’t true. The confusion of incompatible beliefs and practices meant that except in the most general sense we did not share an experience of being one Church at all. Indeed if we reflected on the teachings and practices of our own particular Evangelical community we would probably find that some of those we met were not properly considered to be Christian at all. The Evangelical community I had belonged to began with a desire to unite all believers in Christ in a simple way, but within 13 years of the first simple meeting it had broken into two irreconcilable groups, and more divisions followed, because it is not possible to be the Church except on the basis of shared life, doctrine and practice.

How does this apply to me as an Orthodox Christian? It might seem that in fact I can ask the same question. What Church do you belong to? Perhaps the answers are a little different. Isn’t that just the same? Are we just a collection of rather more culturally exotic communities and no more an expression of one Church than is found in Evangelicalism and Protestantism? I believe not. I believe that in fact what we find in Orthodoxy is not the same at all.

When an Evangelical speaks of belonging to one Church he cannot avoid meaning a meta-community than does not exist as a reality on earth, and cannot exist, since it has to describe a community in which almost all doctrine and spiritual practice is denied any authority. It has to include, for instance, those who insist on speaking in tongues and those who reject speaking in tongues as demonic. It has to include those who baptise infants and those who reject the baptism of infants, and even those who do not baptise anyone at all! When every difference of theology and practice is avoided, since it introduces difference and division, there is nothing left to describe the Church!

Orthodoxy is not the same at all. Though there are those Orthodox who do seem to have a wrong understanding and more or less create the same rather empty sense of what the Church is. While Protestant groups have some elements in common but manifest an inrreducible and irrconcilable difference in what they believe and practice, our Orthodox communities, though having a cultural diversity, in fact share an indivisible unity of belief and practice which is the manifestation of the Church, the Body of Christ in the world.

In modern times we have tended to allow our Orthodox communities to be defined in ethnic terms by those outside the Church, and even by those who have not fully understood our traditional Orthodox ecclesiology. Yet we are not, and have never been, communities defined by different ethnicities or languages. We have always been the Orthodox community in a place. Thus, our Pope and Patriarch Tawadros, is properly the Pope and Patriarch of Alexandria, of the Orthodox community of that city and its surrounding area. He is the Patriarch of all who find themselves in the jurisdiction of Alexandria, those gathered in this place. In the past, our community of Alexandria encompassed many ethnicities and languages, Greek, Coptic, Nubian, Ethiopian, Libyan. In the same way the Church of Antioch was both Greek and Syrian, and was neither the Church of Greeks or of Syrians, but of all and any who found themselves in the area which was part of the jurisdiction of the great city of Antioch.

There have been Syrian Patriarchs of Alexandria, and not all of the Patriarchs of Antioch have been of Syrian ethnicity. This is because our Orthodox communities have never been defined as belonging to an ethnicity but are a unity of all those gathered together in a particular place. Therefore when I see the diversity of vestments, iconography and liturgy among the communities of our Orthodox Church I do not create a false division and difference. I see the unity of doctrine and practice, and the communion of life and grace. Pope Tawadros is the senior bishop, the Patriarch, of that local Orthodox jurisdiction to which I am blessed to belong. But the Orthodox Church is not the Orthodox Patriarchate of Alexandria, it is made up of a unity of all of the local Orthodox communities. I see this expressed in the presence of brother Bishops and Patriarchs at the enthronement of His Holiness Pope Tawadros, not as guests, but as necessary participants. Likewise, when I attended the enthronement of the Armenian Orthodox Patriarch Mesrob of Istanbul and saw Bishops and Metropolitans from all of our local Orthodox jurisdictions laid hands on him, this was not a gesture, but a necessary aspect of expressing the unity of the Orthodox Church in all places and organised in a variety of jurisdictions.

When we define the Orthodox Church in narrow cultural and ethnic terms then we are dividing the Church and subverting that unity for which Christ prayed. Yes, of course the Orthodox of India worship in Malayalam, and those in Egypt worship in Coptic and Arabic, and those in Syria in Syrian and Arabic. And this pattern is reproduced in the West so that now Orthodox are found worshipping in English, French, Italian and many other languages of the places they find themselves. But the Orthodox Church is not defined by our variety of ethnicities, cultures and languages. Rather it finds a true union in a communion of life, and a unity of doctrine and practice.

But it is not only members of the Coptic Orthodox Church who might think is this manner. I have been told in the past that I could not become Orthodox because I was not Greek. And in recent times the local Orthodox jurisdictions have allowed themselves to be defined in ethnic terms, as Russian Orthodox, Romanian Orthodox, Greek Orthodox etc, rather than as our ecclesiology demands of us, that we be the Orthodox Church in Russia, in Romania, in Greece, and indeed in Egypt for all people who are in those places.

This is how we are different to the multitude of Protestant groups who have fractured the Church and cannot restore it with such a plurality of irreconcilable doctrines and practices. We have an Apostolic unity of faith and spirituality that we must not easily allow to be lost. And it is lost when we think that Orthodoxy belongs to an ethnicity and language, and is not universal and experienced as a unity in all places even while there is a diversity of culture and language. We express this unity, this universality, by refusing to identify Orthodoxy only with our experience of it within a single culture. We express this unity by seeking to find fellowship among other Orthodox, by developing relationships with those who belong to the one Orthodox Church but are members of other local Orthodox jurisdictions. We express this unity by making effort to learn from and venerate the Fathers of other local Orthodox communities, while sharing our own experiences and that which our own Fathers have taught us. We express this unity by participating in events and prayer with those who are together with us, members of the one Orthodox Church.

When I insist that before all else I am Orthodox, and we should all insist on this, it is because our experience as Orthodox Christians in a variety of cultures remains always one of unity and communion in an identity of faith and practice despite our diverse cultures and languages. Those who are Protestant within the same language and culture find division and separation on the basis of the difference of doctrines which are taught and the spirituality which is practiced. But those who are committed to Orthodoxy as the universal Body of Christ find unity and communion where there is a difference of culture and language because we share in the confession of and participation in the Apostolic Faith.

Before all else we must all be only Orthodox, otherwise we are not Orthodox at all, because Orthodoxy is not and cannot be limited to a time or a place or an ethnicity or a language. It belongs to all and is for all and unites all in Christ who makes us all citizens of the heavenly kingdom.

Only Orthodox! added by cmadmin on 4th July 2016
View all posts by cmadmin →

6 Responses to "Only Orthodox!"