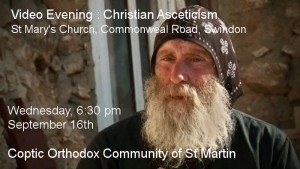 The evening will begin with a short period of Orthodox Prayer, and then the video will be shown, followed by some refreshments and conversation.

All are welcome. This is a very interesting documentary about the experience of an Australian man who became an Orthodox monk living in the mountains above the ancient monastery of St Anthony in Egypt.