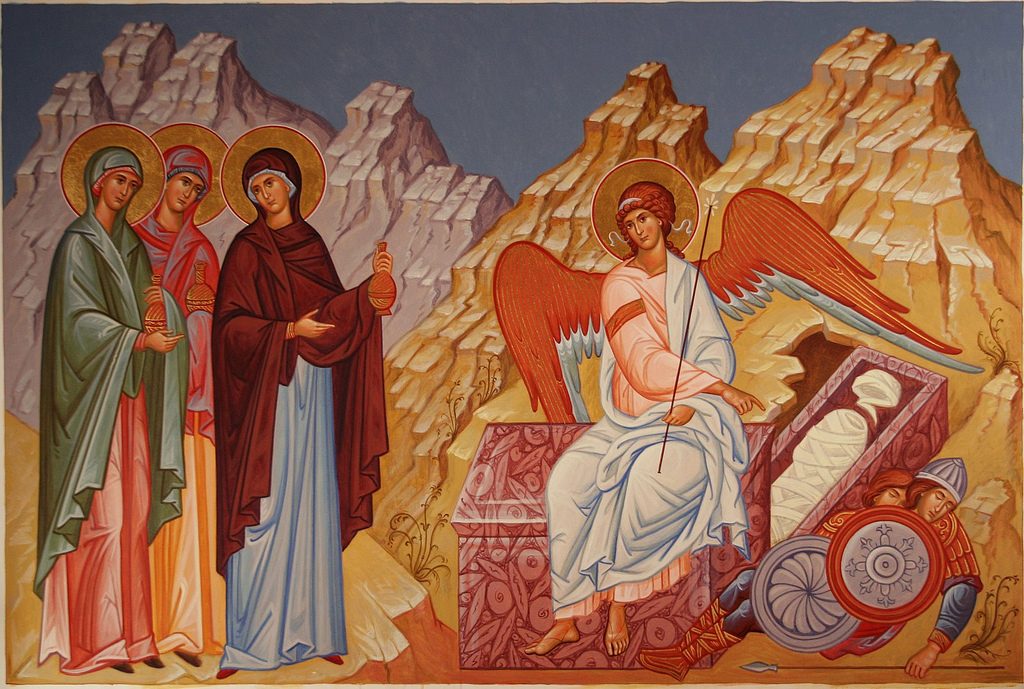 This is the second part of a series of blog posts on this issue of women and the reception of communion during their monthly period. I have spoken about my conviction that discipleship demands that questions be asked, and that it is necessary for those with pastoral responsibility to answer these questions honestly, sensitively and Patristically. To provide a Patristic response requires more than that a few quotations are taken out of context and applied in a legalistic sense. What is necessary is that the Patristic and Scriptural material which concerns a question, and especially a controversial one, should be considered in the widest possible scope.

Why is it taught that Orthodox women should not receive communion during their monthly period? We will begin by seeking to understand the argument of those who consider it is inappropriate for a women to commune. There are two canons, or regulations, which are usually noted. These are the Second Canon of Dionysius of Alexandria, and the Seventh Canon of Timothy of Alexandria. At first we will just consider what these Canons say in themselves, but then we will need to put them in context.

Concerning menstruous women, whether they ought to enter the temple of God while in such a state, I think it superfluous even to put the question. For, I opine, not even they themselves, being faithful and pious, would dare when in this state either to approach the Holy Table or to touch the body and blood of Christ. For not even the woman with a twelve years’ issue would come into actual contact with Him, but only with the edge of His garment, to be cured. There is no objection to one’s praying no matter how he may be or to one’s remembering the Lord at any time and in any state whatever, and petitioning to receive help; but if one is not wholly clean both in soul and in body, he shall be prevented from coming up to the Holies of Holies.

If a woman finds herself in the plight peculiar to her sex, ought she to come to the Mysteries on that day, or not? She ought not to do so, until she has been purified.

Now we should examine these texts carefully, before we introduce others to place them in a proper context. These are usually the basis on which those who consider a woman must always abstain from communion during her monthly period base their opinion. Dionysius of Alexandria is responding to a question from Bishop Basilides of the Pentapolis, now the coastal region of modern Libya. He has been asked whether it is permitted for a woman to even enter the Church building during her period. Dionysius makes the following statements:

In the questions and answers which Timothy of Alexandria produced we find the following statements:

For many, it has been enough to repeat these instructions and expect them to be adopted in obedience as if nothing more needed to be said. But in fact the Patristic witness is of a much greater and richer extent than these two short instructions. Even the other statements of these two Archbishops of Alexandria, contained in the texts from which these instructions have been excerpted, provide a wider context in which to place these particular comments.

The main contention in these two short passages is that a women is not “wholly clean in soul and body” and is not “purified” when experiencing her monthly period. This introduces a concept of ritual cleanliness which is problematic for many who consider this issue today, nor was it without controversy in the Patristic period. It will therefore be necessary to place these regulations into the context of the wider teaching of the Fathers’ about ritual purity in the Church, and indeed to ask whether there is legitimately such a concept at all. This will allow us to consider why these two Fathers chose to write as they did. Dionysius of Alexandria, for instance, was a disciple of Origen, and therefore some consideration of the views of Origen will allow us to place those of Dionysius in context.

It will also be useful to consider other external influences on these writers. The Jewish population in Alexandria, and the representation of Jewish converts in the early Alexandrian Church was significant, since in the Apostolic period the Jews had a population of perhaps 10-15% of the total population of Egypt, and were especially heavily represented in Alexandria where they occupied two of the five Quartiers of the the city. Their population had diminished even by the time of Dionysius, not least due to participation in the Jewish Revolt of the 2nd century, but it seems entirely reasonable that the presence of such a large minority in the city would have some wider cultural effect and this must also be investigated. This is not necessarily the same as Judaising, rather it simply recognises that the Church develops in different cultural contexts, and one which is heavily influenced by a large Jewish community will as a matter of course bear some traces of that minority culture.

Returning to these texts, and especially that of Dionysius, it is clear that his response to Basilides’ question is one which contains a cultural component. That does not mean his answer is invalid at all, but it does mean that it is not a straightforwardly Scriptural or theological one. He does not begin with Scripture and then express a sense of cultural horror that a woman would approach the Body and Blood of our Lord at the time of her monthly period. Rather he begins with a sense of cultural horror and then tries to find a Scripture to explain and support his opinion.

We have already considered the substance of Dionysius’ regulation, but what are the issues we might raise with regard to it, taken in isolation at this stage?

It is reasonable to suggest, it seems to me, that a private letter sent to a fellow bishop, with instructions on matters that have a significant cultural basis, and for which no clear theological justification is provided, is not of the same weight as the theological canons of an ecumenical council. Once again, I must state clearly that this does not mean they could or should be ignored. But there are a great many statements of His Holiness Pope Shenouda, of a similar personal basis, urging certain behaviours and prohibiting others, which have not gained the force of universal canons or regulations. I read one just a few days ago in which he objected to those who had not served at the altar receiving communion behind the iconostasis, yet in many Churches this advice, or even instruction, is ignored, and even women receive communion behind the iconostasis, let alone un-vested men.

The canons do not form a new Christian Law. They are instructions and regulations with varying degrees of authority but which are essentially based on real and immediate issues. Some of them have a universal character. We understand immediately why they apply. The resistance shown in the Church in the past years to the election of a Diocesan Bishop to the Patriarchate was, to a great extent, because the Ecumenical Canon, the regulation decided at an Ecumenical Council, seems to make sense when it states that a bishop should not move from one Diocese to another. There should not be a career path for bishops, rather a Bishop should be married, as it were, to his Diocese so that he has to make the most of the life-long relationship established with his flock, and his flock have to make the most of their life-long relationship with him. Yet even in this case, our Coptic Orthodox Church is one of the last to maintain the value of this Canon, as most other Orthodox communities, Eastern and Oriental, routinely transfer bishops from place to place.

But the Canon had force in our Coptic Orthodox community at the time of the last Patriarchal election because it made sense, and what it was intended to prevent could be easily understood. Not all canons have such an enduring force. Some are intended to be very local in time and place. If a priest sits down with his local parish council and it is determined that the priest will have a dedicated parking space nearest the Church, then this is also a canon. It meets a local need for a decision on some issue. But it is unlikely that it will be adopted by any other parish, unless a visiting priest thinks it a good idea and suggests it to his own Church. Yet a Canon which says that only the authorised books of Scripture may be read in the Church is a regulation which has a bearing and an application in every Orthodox Church in every time and place.

What about a Canon that says an Orthodox Christian must never use a Jewish barber? Is that still relevant, as if we were following a legal code? What does it mean? Only a relatively few Orthodox Christians would have delved so deep into the history of the Church that they would understand why such a regulation was made. But it is surely not relevant today, indeed it would be thought generally offensive and un-Christian to discriminate against a barber or hair stylist on the basis of their ethnic or religious background. This is because at some point the specific cultural context in which one regulation made sense no longer applies, and what had been a useful and necessary rule, can become incomprehensible and even harmful.

I must repeat myself, and will continue to do so. This does not mean we can just choose for ourselves what we will believe and how we will act. But it is certainly necessary for the Church, as a community of men and women, organised in the ranks of the episcopate, priesthood, diaconate and laity, to reflect on those issues which stop making sense. Our Tradition is not found in simply doing what it seems we are told, but in living out a rational faith, because our Fathers did not act irrationally. They spoke as they did because of the teaching they had themselves received, and the cultural influences and context in which they found themselves.

When Dionysius said that no one was in doubt that a woman was unprepared in her soul and body to receive communion during her period he spoke rationally and out of a particular culture. But the fact that this no longer seems to obvious at all, and the fact that his advice seems to be rooted in his own cultural sense rather than in the clear witness of Scripture seems to me to require of us that we examine this issue again with humility and careful study.

This careful study now requires that the opinions of Dionysius and Timothy of Alexandria about women receiving communion be placed in the context of the other views they expressed in the same texts. It has been suggested that males are considered ritually unclean in just the same way as women, and that therefore there is a consistency of approach. But turning first to Dionysius, we will see that this was not his view at all.