Are we reading the wrong Bible? 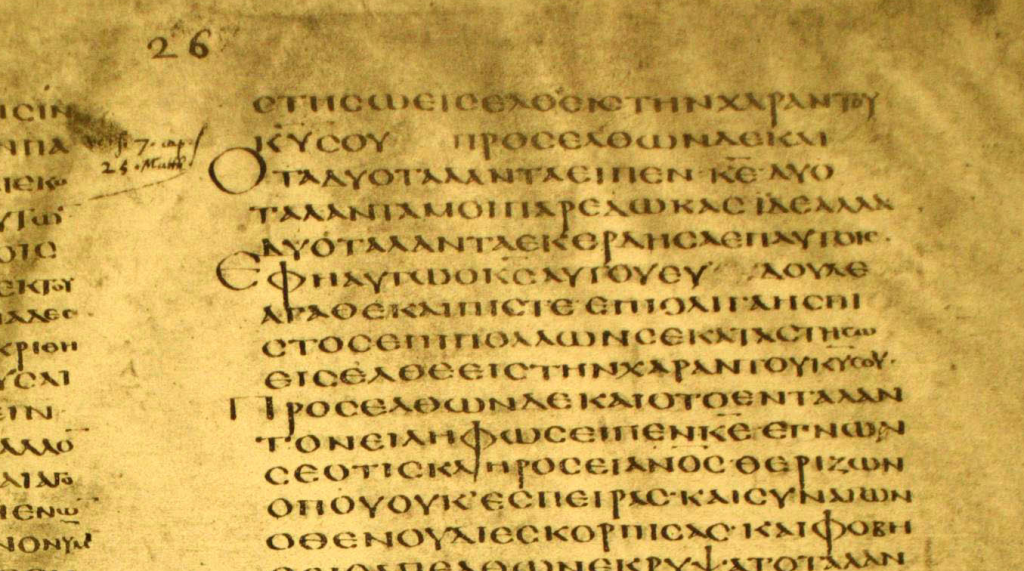 I recently presented a lecture to a group of students and others in Canada about the Orthodox understanding of Scripture. In this lecture, which is available here, I spoke about the fact that the New Testament and the early Church used a version of the Old Testament Scriptures which was a translation into the Greek language made by the Jews in the centuries before Christ. We know this translation as the Septuagint, or the Seventy, because of the tradition that the Pentateuch at least (the first five books of the Old Testament) was translated by Seventy Jewish scholars. By about 135 BC the other sacred writings had also been translated into Greek, or in some cases were written in Greek. This is often very different in meaning to the version of the Old Testament Scriptures which the Jews of Palestine started to adopt as authoritative in the centuries after Christ, and which was finally formalised in about 1000 AD. It was this alternative edition which Protestant translators, teachers and preachers, have depended on, and which has come to be even the usual text in Orthodox Churches, but it is not the text that Orthodox ever used until recent centuries, though it found its way into the Western Church through the translation of the Jewish text made by Jerome in the very late 4th century slowly eroded the use of the Septuagint in the Roman Church.

…in His name Gentiles will trust.

This is a clear prophecy of the universal character of the ministry of the one who will come and of whom Isaiah speaks. The problem is that in the Jewish/Protestant Old Testament the reference is not presented in this way. Isaiah 42:4 in the New King James version says…

…the coastlands shall wait for His law.

This is not really the same at all. Of course there is a connection between the two texts, but one is clearly speaking of the Gentiles finding faith in the one whom God will send, while the other speaks only of the coastlands and the Law. If we consider what the Septuagint says, that edition of the Old Testament that the New Testament and the Church have always used, we find that it is exactly as the Lord Jesus quoted and says..

He shall shine out, and shall not be discouraged, until he have set judgment on the earth: and in his name shall the Gentiles trust.

But there are other differences which are even more theologically significant. In Isaiah 53, for instance, v10 says in the New King James version, a Protestant translation based on the Jewish text…

Yet it pleased the Lord to bruise Him; He has put Him to grief.

What is this saying? It is that God has chosen to bring pain upon this suffering one whom Isaiah describes. This is certainly what most Protestants teach. Other modern Protestant translations of this verse, based on the later Jewish text, say…

The Lord was pleased To crush Him, putting Him to grief. (NASB)

But the Lord wanted to crush him and to make him suffer. (CEB)

Still, it’s what God had in mind all along, to crush him with pain. (MSG)

But it was the Lord’s good plan to crush him and cause him grief. (NLT)
These slightly different translations of the same text from the later Jewish edition of the Old Testament certainly support the Protestant doctrine of the Atonement, in which God pours out his anger and wrath and hatred upon Jesus Christ, and that it was for the purpose of bearing this wrath that Christ came into the world. When Orthodox Christians, especially those who are not experienced in understanding Protestantism, are pointed to these texts by their Protestant friends they can easily be confused and find their faith disturbed, because it seems that the Protestants are simply saying what the Bible says.
But in fact the Bible that our Lord Jesus used, and which the Apostles constantly refer, to and which our Fathers preached from. Indeed the Bible that was universally used in the Orthodox Church until the Protestants began to produce their own translations into Arabic in the Middle East, and into English in the West, does not say the same thing at all. In the Septuagint, the Bible of Jesus and the Apostles, this verse says…
And the Lord desires to cleanse him from his blow. (NETS LXX)
The Lord also is pleased to purge him from his stroke. (Brenton LXX)
Much of the rest of this chapter is couched in the same language. Far from God punishing the Christ who would come, or cause him pain, we find in the Orthodox and Apostolic Old Testament, the Septuagint, that God is the one who is sustaining Christ. In v11 we read, in the Septuagint…
And the Lord wishes to take away from the pain of his soul, to show him light and fill him with understanding, to justify a righteous one who is well subject to many, and he himself shall bear their sins. (NETS LXX)
This is again an entirely positive passage. God is the one who will take away the pain of the suffering Christ. But in the Protestant versions of the Bible, using the later Jewish text, it says…
And the good pleasure of the Lord will prosper in His hand. As a result of the anguish of His soul, He will see it and be satisfied. (NASB)

This Protestant translation says that God will see the suffering of Christ and will be satisfied. Of course such a translation both supports and produces the Protestant teaching about the Atonement, the idea that God punishes his Son and pours out his wrath and anger upon him. But this is not what the passage teaches in the authentically Christian edition of the Old Testament.
In one other passage, the Septuagint in v6 tells us that….
The Lord gave him over to our sins. (NETS LXX)
This is not the same as the translation in Protestant editions which say…
The Lord gave him the punishment we deserved. (CEV)
And God has piled all our sins, everything we’ve done wrong, on him. (MSG)
The Lord has caused the iniquity of us all to fall on Him. (NASB)
God laid on him the guilt and sins of every one of us! (TLB)

This entirely different translation based on a different text produces an entirely different understanding of salvation. In the Septuagint we see that God speaks as giving his Son for a dangerous mission, but in the Protestant translations based on the later Jewish text, we see that is is said that God himself is punishing and is the cause of the suffering of Christ. This is not the Christian teaching at all. These ideas are not found in the text that our Lord Jesus quotes. They are not found in the text that the Apostles used hundreds of times in the New Testament. They are not found in the Scriptures used by the Fathers or in the services of the Orthodox Churches.

This matters a very great deal. It is not too simplistic to say that a Protestant edition of the Old Testament, based on later Jewish texts, will quite naturally teach a Protestant understanding of Christianity. It is the Septuagint, the translation of the Old Testament made by the Jews into Greek some centuries before Christ, which preserves the authentic text which was received by the Orthodox and Apostolic Church, and which is the basis for the Orthodox and Apostolic understanding of the Faith.

What should we do? Ideally we will use, in the English language and in other languages, a translation which is based on the Septuagint. These are available. The Orthodox Study Bible uses a translation of the Septuagint and is probably the easiest edition to obtain and use in English. Our choice of Bible does matter. It is not simply a matter of preferring one form of language over another. What is at stake is the authority of the text and the doctrine it presents. The Septuagint is the Orthodox and Apostolic text of the Old Testament. Nothing else will really do. And everything else cannot help but undermine the Apostolic message of salvation, not least by presenting a false teaching of what happened on the cross. We haven’t taken this issue seriously enough at all, and countless confused Orthodox bear testimony to the cost.

Are we reading the wrong Bible? added by cmadmin on 14th November 2016
View all posts by cmadmin →