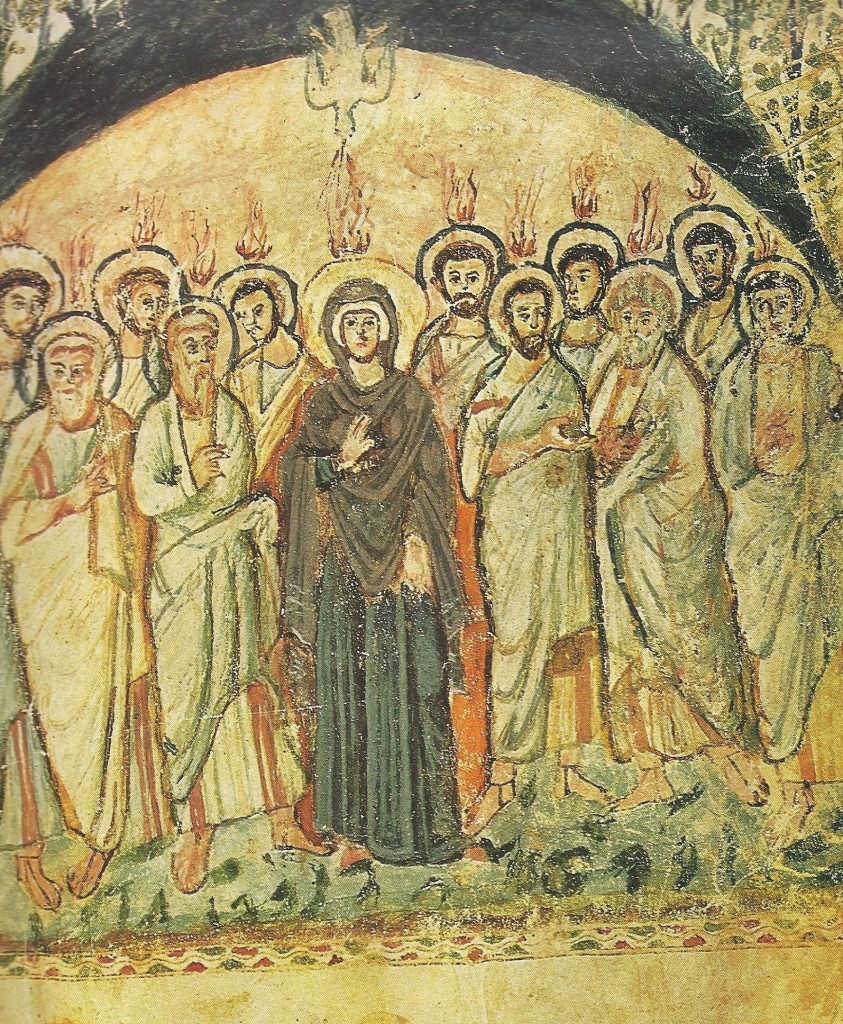 These are the wonderful hymns composed by St Severus, the Pillar of Orthodoxy, for the Feast of Pentecost. Each one is filled with pure and accurate spiritual teaching and is worthy of careful and prayerful reflection. May his prayer be with us all.

Christ, even God, by suffering a voluntary passion
On our behalf in the flesh
And rising in glory from among the dead
Quickened and raised us also with him
Who were lost and dead in sin.

And he brought to nought and dissolved
The power of the tyranny of the devil and of the demons.
Therefore down to the day of Pentecost
We do not bend the knee to the eath when we pray.

And against our enemies we sing and say
With the divine Psalmist and prophet David
They have been entangled and have fallen
But we have risen, and been set upright.

But, when the Holy Spirit has shone
And been revealed to us in a God-befitting fashion,
We bow the knee because
We cannot endure the sight of him.

And we signify that it is through the Spirit, the Paraclete
That we have learned the perfect worship
In the Holy Trinity.
For God is a Spirit
And they that worship him
Must worship before him in spirit and in truth.

Thou wast made known aforetime
Through the law and the prophets,
O God of all and Father,
And by their means thou didst announce and show forth
Thy Only Son and Word and the Holy Spirit,

But not clearly because
They were not yet capable of understanding
When the one Godhead of the Trinity was revealed.
But when the Word and God became incarnate
And became man on our behalf without variation,

He showed himself equal to thee, Father,
Through the wonderful works which he did;
And after he has ascended to heaven,
He shows plainly today, as to men who have become perfect,

The Godhead of the Spirit, the Paraclete,
Which in the shape of tongues of fire
Rested and abode upon the holy apostles,

In order that they might burn and destroy the thorns,
Which the transgression of our father Adam planted aforetime;
They who also taught us to praise the one God in three holy hypostases:
Whom also worshipping we say, Praise to thee!

Moses in one place signifying
Though in mysterious fashion
The one essence of the Trinity
In three holy hypostases said,

Listen and hear, Israel: the Lord thy God is one Lord;
But those who then heard were not capable of understanding
The great and hidden mystery of the theology.

Therefore, when the only Word
Who is in the bosom of the Father became incarnate,
He declared to us and explained to us clearly,
As far as was possible,
The inexplicable character of his Godhead:

And the Spirit also, the Paraclete,
By resting in his grace on the holy apostles
In tongues of fire showed that he is God over all,
And the Spirit of truth,
Who proceeds everlastingly from God the Father.

Wherefore let us cry to him in entreaty,
Examine and purify, O God, our mind and tongue,
In order that we may say, as befits the Godhead,
Praise to the Father and to the Son and to the Holy Spirit!,
And that we may know that thou art one God
Without division in three hypostases.

Who will not say that the depth of theology is an infinite abyss?
I think in my mind on the Father,
And I am filled with light,
and I consider myself to have everything.

I go on to ponder upon the Son,
Not am I thereby straightened in mind:
but I am again enlightened with another light
That is full and of equal honour.

But, when further in addition to these
I receive in myself thoughts concerning the Holy Spirit also,
I find in three perfect and unconfused hypostases
One light of the Godhead.

And the indivisible union of this is shown
By the miracle that was wrought,
which gathered the divided tongues into one,
And made the divine apostles to use them all as if they were one:

By whose prayers we beg, my Lord,
bestow upon us also the union and concord of the Holy Spirit,
And the bond of right faith:
And keep us and be merciful to us,
According to the abundance of thy great mercy.

After the Ascension of the great God
And Saviour of all, Jesus Christ,
In the flesh from earth to heaven
In accordance with the God-befitting promise
Of his words that cannot lie,

His Holy Spirit rested and abode
Upon the holy apostles in tongues of fire:
Who by speaking in the tongues of all peoples
And proclaiming the teaching concerning the kingdom of heaven

Equally in the Father and in the Son and in the Holy Spirit,
In three unconfused and perfect hypostases, one Godhead;
Which also let us worship and praise,
Confessing his great and ineffable mercy.

He who once spake through the holy prophets,
The Paraclete, the Holy Spirit,
Has in everything signified and shown to us
That he is God equal in essence and equal in honour
To the Father and to the Son.

Aforetime through the books of the law
And in the prophecies of the prophets
He taught saying as in the person of the Father,
These things saith the Lord.

These things saith the Holy Spirit:
Who also in the shape of tongues of fire
Rested and abode upon them;
In order that on every side the equality and kingship

And invariability in all things
Of the Holy Trinity might be made known,
And that we might praise the ineffable mercy
Which has been revealed
And has taught us the knowledge of God.

When the divine apostles were carrying
The gospel-teaching in the newness of the spirit
As Paul said and not in the oldness of the letter,
And were giving a sign that this was so

In the fact that they spoke with all kinds of tongues,
The Jews  who were full of envy,
Who had grown old and aged in their sins,
And not wishing for the truth, said, mocking,

They have drunk sweet wine and are drunk:
For it was the new wine of the perfect grace of the Spirit
Of which the divine apostles were full,

Having been purified by means of the tongues of fire:
Through whose prayers we beseech thee
Make us free and pure from the old wickedness,
as thou art the only merciful one.