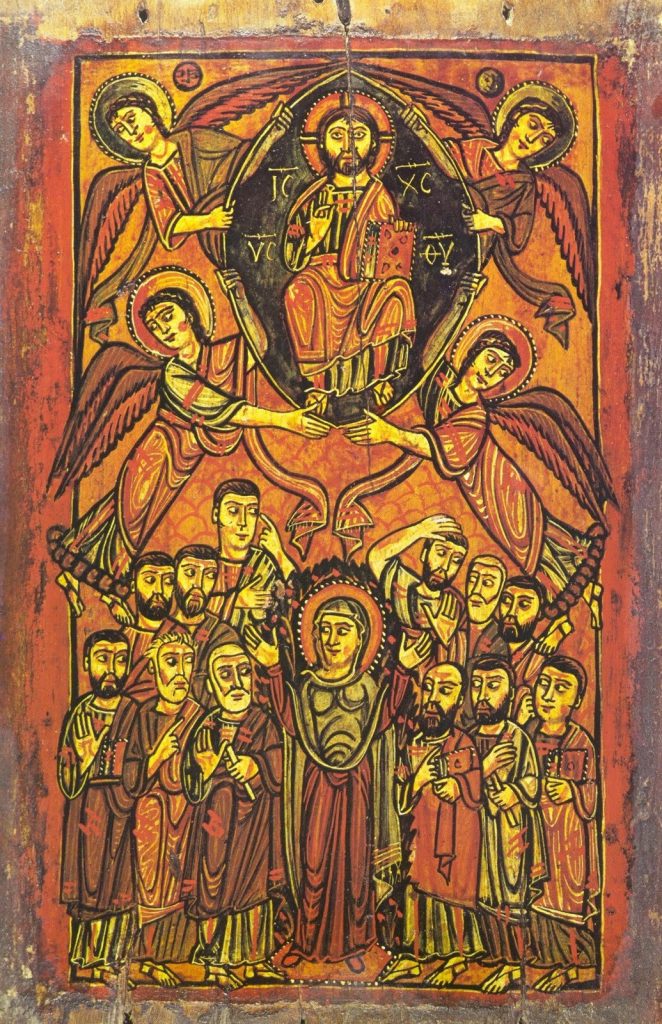 Here are several hymns of St Severus of Antioch on the Feast of the Ascension. Each one is a jewel, a precious gem, filled with an accurate and Orthodox Christology describing our Lord Jesus Christ, the Word of God incarnate, as perfect God and perfect man, without confusion, mixture, division or separation. May the prayers and blessing of this great father among the saints be with us all.

Thou, God, who bowed the heavens,
And came down like rain upon a fleece,
Became incarnate without change,
Of the Holy Spirit, and of the God-Bearer,
The Virgin Mary.

Thou fulfilled the dispensation
In the flesh, without tumult,
And ascended in glory into heaven
With a shout of God-befitting praise,
And with the voice of a trumpet,
Being recognised by the bodiless hosts
Of heavenly beings to be King of Glory.

Though making no addition at all to the Trinity
Remaining God, and being the same,
Thou became man for our sake,
Raising and setting us together
With Thee in glory in heaven.
Praise to Thee!

The Word who is before the ages,
The Only One, the wisdom and power of God,
As he was in an incomprehensible manner
Hypo-statically united to flesh possessing an intelligent soul,
When of His own will he came down to earth,
And yet did not leave heaven, but filled all things,

So also after he had risen from among the dead
Went up and was exalted in the body to heaven,
Though he had never left or abandoned the throne of glory;

In order that, having raised with him all of us who have been saved by grace
Like a second Adam, he might also make us to sit with him
In heaven in great God-befitting glory,
According to the abundant and incomprehensible riches
Of His grace toward us.

With him therefore as he goes up
Let us all go up to heaven in mind,
And with David the prophet let us cry and say,
God hath gone up with praise and a procession of victory,
The Lord with the voice of a trump;

And, being joined to the sublime hosts
And having been exalted with him
That is exalted and cannot be approached,
Let us make answer to the more sublime hosts and say,
Lift up the gates, rulers among you;
And be opened and lifted up, eternal gates,
And the great King of all the ages in glory shall come in,
The Lord of all hosts.

The Word of God, who shone on us,
Who were aforetime sitting in darkness
And in the shadows of death,
Through his saving coming in the flesh,
And raised us with him, who were dead,
Through his glorious Resurrection from the dead,
Hath made us to ascend together with him to heaven
Through his divine Ascension, and to sit with him in glory before his Father.

Though the only Son of God, the Word,
United to himself hypostatically the flesh of our weakness,
Possessing a rational and intelligent soul,
Without sin and pollution without being changed
(For this was required for the purpose of healing us, the feeble ones affected by the disease of sin),

Yet still, as being mighty and omnipotent,
He in it overcame and brought to naught the devil
Who has the power of death,
And, after he had risen from the dead,
He ascended in glory to heaven;

So that the hosts of the heavenly ones also sing to him the song of victory.
Some ask, Who is this King of Glory?
And others answering cry to them,
The Lord strong and mighty,
The Lord the mighty in war.

The hosts of heaven shook with amazement,
And trembling seized the lines and ranks of the bodiless armies of angels,
When they saw that their Creator and Maker,
Christ, the Word of God and the Father,
Who became by dispensation the second Adam,
Had in the body been lifted into the heights and exalted,

And had passed through all the heavens,
And in him with him lifted us all to the exalted heights
And made us sit with him in glory and with his heavenly Father,
Us, the strangers, the far-removed and rejected,
The enemies, who are not in any way worthy even of earth.

Therefore together with the prophet David and with the immaterial Company above,
Before the great and new wonder and miracle of our salvation,
Let us all together sing and say
Sing to the Lord a new song of praise,
Because he hath done wonders toward us,
The merciful one.