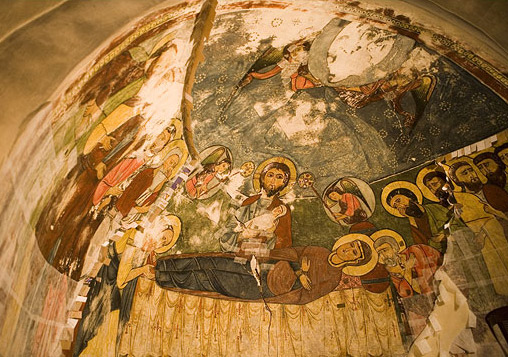 The First Letter of St Severus to Julian of Halicarnassus

Of the Patriarch, to the same Julian. From the instant when I received the letter of your Holiness, I rejoiced, as always, to see myself addressed in a salutation which is most dear to me. As you have also encouraged me to read the Tome, attached to the letter, which you wrote to those who, as you have said, declare that the body of our Lord, Our God and our Savior Jesus Christ is corruptible, and that you have also asked me to send an examination of this controversial question to your piety, after having read it, I have also acquitted myself of this task with care, to please you.
I have done so, while passing from one place to another, and without enjoying either the leisure or the other conditions which could be given me by the freedom to attend to these affairs. However, to the extent that it was possible to write in such a situation, I wrote down what I have learned from the teachings of the Fathers and what I have gathered from the books which have fallen into my hands.
I know, yes, I know that this same question was debated in Constantinople too, and that what we have alleged, drawn from the teachings of the Fathers, dispelled this conflict. Now concerning the things of what you have written, I am of the contrary opinion, and I find that those who were successively the doctors of the holy church give us access to the mysteries by a different way. I have very timely delayed in sending your Holiness my comments on these subjects, in order to avoid those who fail to understand the meaning and dialectic of the remarks being exchanged from coming to the conviction of saying and believing that the discussion I have on this subject is a chicanery controversy.
For, as you well know, a simple exchange of views, even if it takes place in the greatest charity, does not seem to avoid the appearance of a controversy. Write to me, therefore, without delaying your opinion, for I, for my part, am disposed to do what will appease your holiness, because my ears are haunted with the words of the Apostle who wisely exhorts us, “Whatever you, do do it in charity “