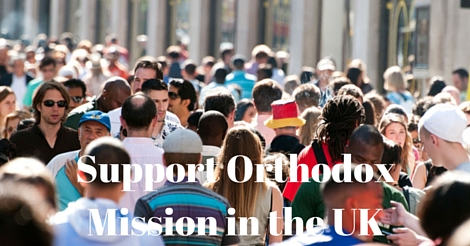 I was in Stoke a week ago. This is one of the areas where I am working in the St George Orthodox Ministry to share our Orthodox Faith with British people. I was walking down the street towards the centre of the town when a young British woman came up to me. She was smoking a little cigarette, and was dressed as an ordinary, rather poor, local person. “Are you a priest?” she asked. I said that I was. She burst into tears. It seemed that a close family member had died and she wanted to speak to me.

That same afternoon, I had prayed the prayers to bless a new community centre in the heart of the town that we are supporting as a local Coptic Orthodox Community. One of the local British people present asked to speak to me. He started to share his own difficult experiences and also burst into tears. He felt able to speak to me, as an Orthodox priest, even though I was dressed in a manner that few Christian clergy adopt in Britain anymore. In fact, as an ordinary British person, he expected me to look like a priest when I was serving the community in such a way.

On Saturday, during the Liturgy I celebrated in Stoke, another ordinary British man had asked to be made a catechumen. I prayed for him, and anointed him with oil according to the Coptic Orthodox tradition, and he began a process with us that will lead to his reception into our Coptic Orthodox Church in due course. He is not the first, and God willing he will not be the last. There are many British people who are seeking a deeper and richer experience of the life of Christ by the Holy Spirit, and find it in our Orthodox spiritual tradition.

The St George Orthodox Ministry is one among many in the different Orthodox Churches which is sharing the Orthodox Faith with British people. This ministry serves within the Patriarchal Diocese of the Coptic Orthodox Church, and is under the care of His Grace Bishop Angaelos. We have only this ambition, to be able to share our Coptic Orthodox Faith and Life with the British people around us. This ministry has a blessing to be active at present in Stoke, Swindon and Windsor, and in each place there are converts and catechumens, and a great desire to share our Orthodoxy.

We are organising Orthodox services, meetings to study the Bible and the teachings of our Church Fathers, showing Orthodox instructional videos, holding Orthodox study days on our Orthodox spirituality, producing teaching materials and videos, and many other activities which support our missionary work among British people. This website is one aspect of our service, and is becoming the central location for much of the material we are producing.

The St George Orthodox Ministry is required to be self-supporting, and must depend on the financial resources generously provided by the members of the the Coptic Orthodox communities being established in Stoke, Swindon and Windsor, and also by friends and supporters around the world.

The committed members of each of these groups are supporting the funding of this missionary ministry as far as they are able. But there are costs of hiring places to worship and organise meetings, the expense of fuel and road tolls incurred in Father Peter travelling around the country to lead these missions, the costs of producing materials to teach our Orthodox faith to others. Even when these are reduced as far as is possible, the present cost of this missionary activity is more than the committed members can bear themselves.

The St George Orthodox Ministry is not asking for unlimited support, just that assistance which will allow us to establish these missionary communities as self-sufficient and able to cover the cost of this missionary ministry themselves.

Will you consider helping to support the missionary activity being conducted in these three places? Your kindness will be much appreciated, either in a single donation or by a regular commitment. As these communities grow in God’s will it is our intention that they should bear all of the costs associated with this ministry, but at this early stage the help of other friends around the world, in prayer and in generosity, is required. At the moment we need to raise £500 a month to cover the costs of this missionary ministry.

Can we find just 50 people around the world who will commit to even as little as £5 a month for this next year to support our Coptic Orthodox missionary activity?

May the Lord bless you.