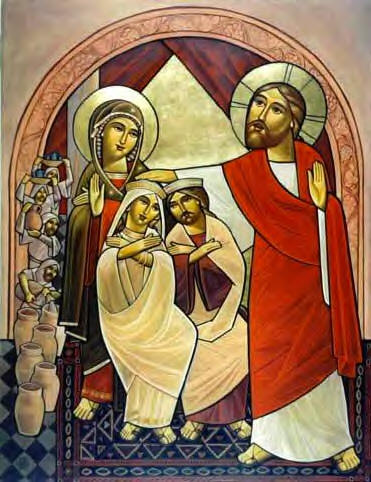 It was with very great pleasure that I received the kind invitation of your vicar, and my brother in Christ, Simon Stevenette, to speak this morning at your celebration of the Eucharist. My name is Peter Farrington, and I am a priest of the Coptic Orthodox Church. The Coptic Orthodox Church has often been in the news in recent years, most often because of sad and tragic events in Egypt, where it is the ancient Church founded by St Mark in the first century.

I am myself from an evangelical background and I am English. I was brought up in a devout evangelical family, within the Plymouth Brethren, and I spent three years at an Evangelical Bible College training and preparing for ministry, but my life has not ended up entirely as I might have expected, and my spiritual pilgrimage has led me to becoming Orthodox, and in due course being ordained as an Orthodox priest here in the UK, where I am working with communities of mostly British people in several places to develop Orthodox congregations at home in our own English culture.

The Gospel reading for today is one of my favourites, and in my own Coptic Orthodox tradition we will commemorate this event on the 22nd January and read the same passage of Scripture.

I often speak about this account in my own Orthodox communities from the perspective of Mary, the Mother of our Lord, the Blessed Mary. I see Mary as the archetypal Christian. Orthodoxy does not elevate her beyond all other members of the Church. She is considered as being entirely human, and in need of a Saviour. But we do not avoid excess on one hand, by going to an extreme on the other, as some have done, suggesting that Mary is nothing more than a vehicle for God to become man, and of no consequence and deserving no honour herself.

On the contrary, while I am always careful to insist that Mary is only human, she is, it seems to me, a human who supremely manifests what it means to serve God, and to know God, and she is in a unique relationship with her Son, our Lord and Saviour Jesus Christ.

If we remember for a moment the events of the Annunciation, when the Angel Gabriel visited Mary in Nazareth. He describes her as one who had found favour with God. The ancient Christian traditions speak of her as one who had been committed to God from her infancy, the answer to the prayers of Joachim and Anna. She receives the blessing of an inconceivable message presented to her by the angel. We might sometimes think that when we are seeking the will of God it would be really helpful if an angel came and shared God’s purposes with us.

But even the presence of an angel is no guarantee that we will understand God’s will. After Mary has heard what will happen she expresses her confusion. How can this be? This is not the faithless response which Zachariah, the father of John the Baptist had given. Gabriel had visited him as well, and had told him that in his old age he would become a father. When he said more or less the same words, how can I be sure about this, he meant, don’t be stupid, that’s impossible. But when Mary asked how it would come about it was because it was not clear how it might happen.

Indeed, as the example of the archetypal Christian she says those words which we are all called to express. Behold the servant of the Lord. Let it be unto me according to your word. This response says to me that it is entirely possible to both submit ourselves entirely to the will of God, but remain in a state of confusion about how the will of God might be worked out. It is possible to have faith and trust in God but cope with a real lack of insight into what God might do to bring about his purposes.

I know for myself that often I am called to trust God for the future, and I have had to learn through painful experience that when he calls me to be obedient I don’t always need to know all the answers. How often I have been surprised at the ways in which God has acted, or moved others to act. Ways which I could never have imagined. Trusting God, we are to follow the example of Mary, even when our circumstances are difficult to understand, and say with Mary, let it be according to your word.

Out of such an experience of faith we find Mary acting again as the archetypal Christian in this account of the Wedding at Cana. We might notice first of all that she was aware of the needs of others…. when they ran out of wine, the mother of Jesus said to Him, “They have no wine.”

If we consider this while we think of Mary showing us how to live out the Christian life, then we see that discovering the needs of others she turns immediately to Christ as the solution of the problem. We are often faced with desperate situations in our family circle, or in the lives of friends and those with whom we work. What are we to do? Of course we will want to support people in practical ways and with sympathy and love. But I believe that Mary shows us that in the first place, and always, we must bring the needs of others to Jesus Christ and express them to him in prayer.

Our Lord Jesus replies to her… Woman, what does your concern have to do with Me? My hour has not yet come. This sounds much more dismissive in English than it would have done. Woman has the sense of meaning lady. And the Lord Jesus is here at the beginning of his ministry. He has performed no miracles yet. It seems as though he is saying that he can or will do nothing to resolve the problem that Mary has brought to his attention. We might expect her to be disappointed. But look at what she says and does…

His mother said to the servants, “Whatever He says to you, do it”.

How well she knew him. Better perhaps than we imagine. He appears to say, What do you expect from me? I am not ready to show myself. But in faith she turns to the servants, already expecting that he will act in some way for the blessing of those present, and says to them what she says to all of us who are servants and followers of the Lord Jesus…. Whatever He says to you, do it.

Do we experience this in our own lives? We ask the Lord to act on behalf of some person, or situation, even for ourselves. And there is some resistance perhaps, some pause, some requirement laid upon us to be patient, to persevere in prayer, to have faith and hope even when it seems perhaps that God is not acting for us. The Lord Jesus spoke about this often, persevering in prayer with faith and hope. Just a few examples can be found in the parable of the man asking for bread from a neighbour for his visitor, or the woman asking for justice from an unjust judge.

And here at the Wedding, even Mary, the Mother of our Lord, is called to exercise perseverance in prayer. It seems that the Lord says, not yet. But Mary is prepared in faith for him to act as he wills and when he wills for the blessing of those present. What does she ask of the servants? She doesn’t know what might happen. The working out of God’s will is a difficult to imagine as it was when Gabriel had visited her. She says to them what she had said for herself. Whatever He says to you, do it…. Behold the servant of the Lord, let it be according to your word.

Did Mary know that Jesus would ask the servants to fill the water jars with water, and that he would then turn it into wine in response to their obedience and his mother’s faith? I don’t think that is what we find in the Gospel account. Surely what we find in this passage is the first follower of the Lord, his own mother, exercising that faith and trust in God which she had been called to express at the first. Unsure, as we often are, how God’s will might be worked out, but entirely sure that God would act for the salvation of those he had become man to save.

In this she is, as the Orthodox Church suggests, the archetypal Christian, and an example to us all. One of us. But calling us to greater faith and persevering obedience in hope to the will of God. May this be our own experience as we submit ourselves to God whose will is always for our salvation. Amen.