The Week of Prayer for Christian Unity

I had a busy weekend in several places as an Orthodox contribution to the Week of Prayer for Christian Unity. This is not a forced experience of a unity that does not exist, but is, at it suggests, an opportunity to pray with share some time with members of other Christian communities as an expression of a prayerful desire that a more substantive unity in love and truth might be possible. My own view is certainly that there is nothing at all to lose by sharing the love of Christ with others, even those with whom there are disagreements, and everything to gain, not only in possible agreement but in respectful acknowledgement of the image of Christ in each person.

It is well known that I am a traditionalist, serious about the patristic and spiritual teachings of our Orthodox Church. But relationships with others are possible on the basis of just such a commitment to a particular tradition and community. It is when we are not sure what we believe and why we believe it that we become prey to doubts and confusions. When we are established in our faith then we can find common ground with others and commend it, even while lovingly and respectfully facing up to differences. 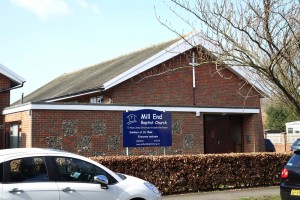 On Saturday I found myself at Mill End Baptist Church in Rickmansworth. I had been kindly invited to run an afternoon study on Orthodox Prayer as a contribution to the Week of Prayer for Christian Unity. The church was a relatively modern one, not dissimilar to the sort of building I had grown up in within evangelicalism. In an attractively decorated and comfortable room I was warmly welcomed by Todd, the pastor, an American from California, and by others in his congregation. About 20-25 people gathered together, from a variety of backgrounds, both church leaders and members.

I began by introducing myself, and then we shared together in praying the Afternoon Prayers from the Agpeya. I had printed copies and distributed them to all present. Everyone seemed to join in with the prayers, readings and psalms. Then I spoke about the Orthodox spirituality, and especially the Daily Officer and the Jesus Prayer. After a few minutes break while we set up the computer and projector I showed everyone gathered in the meeting an excellent video documentary on the Jesus Prayer. I have shown this is several other places and it seems to be a very useful and interesting programme. The afternoon lasted about two hours, with a fairly concentrated attention on Orthodox Prayer. The time together closed with prayer and then I stayed for coffee and conversation. There were plenty of thoughtful comments and questions. It was well worth the commitment of time and effort, and I was blessed to be in such welcoming company for the afternoon, and I hope that everyone who attended found some aspect of the event of benefit to them.

On Sunday morning I had a much earlier start to the day as I had been invited to Swindon, and to participate in the Week of Prayer for Christian Unity activities there. I had to leave home by 7:00 am for the two and a half hour drive. There was a little snow in the air as I drove around the M25 and down the M4. But I arrived on time at Christ Church, Swindon, where the Dean of Swindon, the Revd. Simon Stevenette, had invited me to speak to the children and then to preach at his morning Eucharist. I was made very welcome and waited in the vestry until the service began, then I sat in the front of the congregation and waited to participate.

I spoke to the children about the icon of the Last Supper which I had brought with me, and I showed how it reminded us of the events that had taken place in the Gospels, and also of our Lord Jesus himself. Then I spoke for a little while about how each of us are called to be living representations, living pictures, of the Lord Jesus, sharing his love with those we meet in our homes and schools. The icon of the Last Supper was placed at the front of the Church, just before the altar, so that it could be seen by all who had gathered for the service.

A little later I entered the pulpit and preached a short homily of about 10 minutes on the Gospel reading for the day, which was that of the Wedding at Cana. I spoke about the Virgin Mary, the Theotokos, and especially about how she is the example to us all of the Christian life. Speaking about the Annunciation, as well as the Wedding at Cana, I wanted to reflect on how she was filled with faith, and yet did not always see how God’s will would be worked out.

After the service, when all of the Anglican congregation had come forward to commune, I was taken up to the new community centre recently constructed next to Christ Church. I had a cup of coffee and enjoyed some interesting conversation with some of the members of the Church. It was a blessing to discover that there was a serious interest in spiritual things, and it was a pleasure to speak about prayer in a relaxed situation. Those I had the chance to speak with were of different ages and backgrounds, but we found little things in common ask we talked. 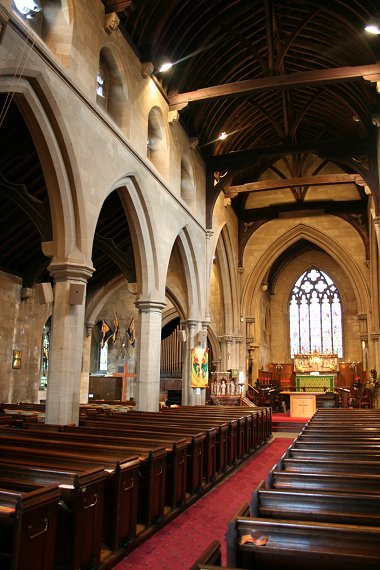 But I wasn’t able to sit too long. During lunchtime a group of servants in the congregation, sides-people and church wardens, were meeting with the vicar, Revd. Simon, to discuss how to provide a better welcome to their community. It was very interesting to listen to them discussing their own desire to welcome people. Even in the small groups with whom I am working I felt that this was a useful and important matter to consider with those in the various Orthodox communities. It was a privilege to be able to be present in such a meeting, and I was made to feel more than just a visitor.

At about 2:00 pm I was back in the Church itself setting up for the afternoon workshop on the Jesus Prayer, which was a contribution to the Week of Prayer for Christian Unity. I’d been provided with a large screen and a lectern, and I had plenty of copies of the Afternoon Prayers from the Agpeya. We started together at 2:30 pm and there were again about 25 people who had come together to learn a little about our Orthodox tradition of Prayer.

Once again, the event started with Afternoon Prayer. Everyone seemed to join in. The mix of participants probably included more Anglicans, clergy and members, and so the use of the Daily Office was not so unusual an idea. Then I spoke about the Orthodox life of Prayer, and especially the Jesus Prayer. It was a blessing to find such interest in a subject that is of great interest to me and to all faithful Orthodox. There was a little more time on Sunday and so I then led a group discussion on the Obstacles and Encouragements to Prayer which we all experience. It seemed important to me that there was an opportunity to actually practice the Jesus Prayer, and so we all moved to a beautiful chapel in the Church and sat quietly in prayer for 6 or 7 minutes. Then to conclude the event I showed the video documentary on the Jesus Prayer which I had shown the previous day.

I hope that everyone who attended found something in the afternoon to benefit them in their own spiritual journey. Over coffee I discovered that one person had begun to learn to create icons. I had friends in common with others. And many of those with whom I spoke had enjoyed the time together and were kind enough to suggest that it had been of value. There was an interest in the ministry I have been conducting in Swindon, and I hope that some of those present might come to future study events about Orthodoxy. 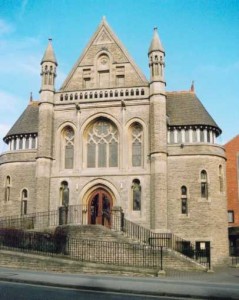 My time in Swindon was not quite over. After some dinner at the vicarage I walked across the town with the Dean of Swindon and reached the Methodist Church, where I had also been invited to participate in the service as part of the Week of Prayer for Christian Unity. I was happy to be with a group of Christians from a variety of backgrounds who were gathered together to pray that God’s will might be worked out in the town. I could share in these prayers, and the service was conducted in order and with reverence. My part was to give the final blessing. I am not certain, but there was a good chance that I was the first Orthodox priest to pray in the church building. Once more, I received a warm and generous welcome. Good contacts were made with serious people. Who knows how the will of God will be worked out. But my service in Swindon convinces me that God is indeed at work, and that our Orthodox Faith and community has some part to play in his purposes.

Afterwards I walked back to Christ Church with Revd. Simon Stevenette. We spoke openly about the desire to share beauty and mystery as part of the Gospel, and to reach ordinary British people with traditional, liturgical Christianity. It was time for me to head home. It had been a long day, but filled with blessing and fruitfulness, opportunities and friendships. I look forward to all that God chooses to do this year through our Orthodox ministry there. Very early on in the service there the Revd. Simon had said to me, you have friends here in Swindon, and this is my experience at each visit.