The Worship of Self 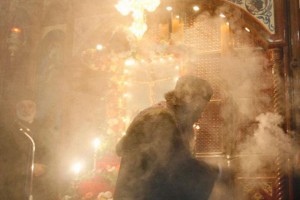 The psalm for today says… I will praise You with my whole heart. This is an entirely life-giving aspiration. The heart represents in Scripture the fullness of the person we are. It means that we are to worship God to the very foundation of our being, and stand before him in that inward centre, that temple of the heart, where we truly experience and express ourselves. When we praise God with our whole heart we mean that there should be no aspect of our person, our identity as a created being, which is excluded from this relationship with God.

And when we praise God it is with that sense of offering thankful worship to Him, as he deserves. Without measure and from an overflowing sense of gratitude and wonder. It is an expression of a relationship with God which recognises that to render to God that which he is due requires the giving of self without limit, so that we give the whole heart, the fulness of our being to God in worship and thankful praise. To praise God with the whole heart is to offer ourselves as a living sacrifice. It is to put self to death on the interior altar while the fragrant incense of worship in humility and obedience is raised.

Yet there are many who have misunderstood the nature of praise and the heart. Instead of praise being the proper response of the heart to the gifts and grace of God, offered especially in interior prayer and in the spiritual worship of the liturgy, it has become an expression of ‘what I like to do’, just as so much of our modern society is based on personal choice and preference. We see this in the way that the word praise is used in contemporary discourse. We hear of times of praise, praise and worship songs, and worship leaders as if this is a human activity that we can choose to engage in when we like.

Of course the Church has a structured worship, and there are times and seasons which are followed, but there is no concept in Orthodoxy of a ‘time of worship before the Liturgy’, as is common in many other groups. I have engaged in such myself as an evangelical, and even led such activities. This all suggests that there is some other experience or feeling which should be sought before we begin Liturgy, or in other contexts outside the Liturgy. Yet within Orthodoxy all is Liturgy. There is no before and after. There is one praise and worship which is offered without ceasing in accordance with our spiritual Tradition, both in the gathering of the faithful together, and in our interior life of prayer.

I have experienced these meetings. There was a time, in the evangelical group in which I was born, when we also wished to supplement the traditional forms of prayer with ‘times of praise’. Since this was my own personal experience I can speak freely of what we meant. We did not enjoy the traditional services very much, and we wanted to sing modern songs which we found exciting and emotionally fulfilling. To that end, we had ‘times of praise’ before our services began, and we met at other times and places to sing these songs, calling what we doing ‘praise’.

I have no doubt that we meant well. But what we were doing, and I what I fear for all such expressions of this idea, was insisting that we best knew what we enjoyed, and that what we enjoyed was the proper measure and standard of the spiritual life as we wished to experience it. I was also committed. I made sure I attended all the public services of our evangelical community, but it was not where I expected to be satisfied and fulfilled.

One of the great blessings in my becoming Orthodox almost 22 years ago was that I found a place where it was expected that the spiritual Tradition would form and inform my spiritual life, rather than my own preferences and personal choices being the inspiration of my spiritual path. When I look back I see that to a great extent I was worshipping myself. I mean that I had set myself up as the Lord of my life, whatever I might say about my commitment to Christ.

I enjoyed singing these modern songs, and so this was what I was going to do. More than that, just as I see that the praise I offered was not thanksgiving from a humble heart, but was an expression of my self-will, so I now see that I had misunderstood what it meant to offer worship from the heart and had confused it with emotionalism and mere feelings. I had thought that if I felt happy then I was praising God. If I felt excited then I was being moved by the Spirit. It was the emotions I felt which measured the extent to which I was praising and worshipping God.

When I attended the services of the evangelical community to which I belonged I did not find the same excitement. Indeed there seemed to be a spiritual deadness, because I had foolishly and dangerously confused emotion with spirituality. I was taken in by this idea and I would listen to these songs on audio tape through the week, seeking to have the same emotions. I remember one event at the Royal Albert Hall. It was tremendously exciting. A great crowd of people, mostly young like myself, with lots of electric music, and modern songs being sung repeatedly. I waved my scarf with great enthusiasm. It seemed to me that this was what Christianity should be like. But I realise now, that despite my good intentions, it was almost all an emotional response to the event and not spiritual at all. I have stood in Wembley Stadium with my son while the vast crowd sings the National Anthem and cheers on our national football team and experienced the same emotions. I’ve been to Bob Dylan concerts where everyone sang along with his songs and experienced the same emotions.

When we are pleasing ourselves with harmless participation in football games or concerts this enjoyment is more or less harmless. But when we introduce it into the spiritual life it is harmful. We do not become spiritual men and women by doing only those things we like and enjoy. Nor will we become mature if we confuse pleasant emotions for spiritual growth. The Orthodox Spiritual Tradition is not one in which we please ourselves nor is it one in which our personal happiness and satisfaction is paramount.

Which Scriptures are foundational for us? They are ones such as ‘Take up your cross’, ‘Deny yourself’, ‘The first shall be last and the last shall be first’, ‘Do whatever he asks of you’, ‘Behold the servant of the Lord’, ‘Hold fast the Tradition’. And the monastic Tradition of our Church, from the earliest times, has shown us that the path of humble obedience is necessary for us all. I do not doubt at all the good intentions of those who take up modern songs, produced outside the Orthodox Tradition. I have tried to avoid criticism of anyone in particular and have spoken of my own experience.

But I do believe that to choose for ourselves how we will worship God is indeed self-will, and therefore the setting up of our self as the authority in our life. And I do believe that to mistake emotion for spirituality is to feed this worship of self and to offer up a strange fire. If a sports coach gives instruction to one who wishes to succeed in the athletic contest, and the potential athlete decides that he will modify this instruction, and introduce other activities which are perhaps suited to other sports, then he may well find that he is unable to succeed in the way he intends, though he may still feel, quite mistakenly, that he is making progress.

Why am I making any effort to learn the rites and hymns of the Coptic Orthodox Rite, now that I have become a priest of the Patriarchal diocese, rather than the British Orthodox diocese? Why are those British people with me making the same effort? Can we not create our own rite as long as we are sincere in wishing to be Orthodox Christians? Of course we could, but it would not result in us remaining Orthodox. There is already an Orthodox Tradition, it does not need me to modify it, and especially not to suit my own preferences. In this Tradition the experience of praise is already set out for us to participate in. Indeed this is the great joy I experience in being Orthodox. I do not have to make my spiritual path for myself. I am not my own spiritual guide. There is a well established way that all those who wish to become Orthodox should follow.

I know that there are reasons why many find our Orthodox worship problematic. I am aware that those with pastoral responsibility, and especially myself, must do more to explain and express what it means to become those who are united with God in Christ by the indwelling Holy Spirit in the Orthodox spiritual Tradition. But introducing elements that do not belong, as I have myself experienced in other communities, but which are pleasing and produce satisfying emotions, are not a fruitful response. Whatever we intend, when we choose for ourselves how we worship God, and when we confuse our emotional and personal satisfaction with spirituality we are at the very least in danger of worshipping self and there is no life in such an outcome. May we be preserved from this in our humble participation in that beautiful and transforming Tradition which we have received and which is life and salvation.

One Response to "The Worship of Self"