Translation – The Book of Councils – Introduction 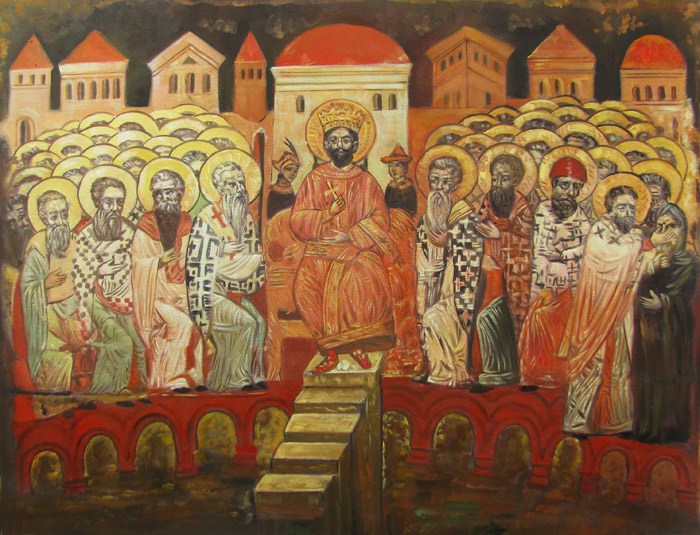 I am beginning a new project to produce an English translation of the Book of Councils by Severus, bishop of Aschmounain, from the 10th century. It was he who also compiled the History of the Patriarchs, and composed the Lamp of the Intellect.

This passage is the introduction to his work, the Book of the Councils, which is a defense and explanation of our Orthodox Faith. The translation will continue in due course, as God permits. I am translating from the French edition of the Arabic text produced by P. Chebli, a Maronite priest, in 1905.

In the name of the Father and the Son and the Holy Spirit, one God.

With the help of God and his good providence, we begin the exhibition of the Book of Councils composed by the virtuous Father Anba Severus, bishop of Aschmounain, known as Ibn-el-Moqaffa. May God give peace to his soul, and grant us mercy by his powerful intercession. Amen.

This exposition was written at the request made to him by someone who had read the History of the Melkite Said ibn-Batriq, with the surname Ibn-el-farrasch, and who found there, offensive words addressed against the Jacobites.

I have received your letter – my faithful and fortunate friend – may God give you the blessing of living in his obedience, and aid you in doing his good will, and protect you! You say that you have come to know a work entitled, A Book of History, by Said ibn-Batriq, known as Ibn-el-farrasch, and you tell me how much and you tell me of the sorrow caused by the insults he addressed to the Jacobites, and the errors he attributed to them in accusing them of having changed the orthodox faith, and of inventing a new doctrine.

Then you ask me, – God preserve you by his providence! – to compose an abbreviated history, which contains the exposition of the faith preached by the Disciples, pillars of the faith, the first true worshipers of God, and his Apostles sent, by condescension, for the good of humanity, and which contains at the same time the doctrine of the Holy Fathers who governed the Church before any innovations. That you may see, and all that read this writing, from whence came judgment, and what was its cause; so that the arguments of those who steadfastly support the error will fall.

You say that Said ibn Balriq was Melkite, and that for this reason you think that he attacked the Jacobites to defend the Melkite doctrine, without presenting any arguments, and without putting forward any evidence to establish his accusations against the Jacobites. Having to talk about history and tell the story of Kings and Patriarchs, he treated the Jacobites only in passing. You also fear that the words of this author and those of the other heterodox have unfortunate effect on the uneducated among the Jacobites and alter their faith.

That is why, in your opinion, the book you’re asking me will be a support for the ignorant. They will find there the light, the confirmation of their belief, the evidence on which it is established, and the response to attacks from opponents. So you urge me to compose it. But what you ask of me is beyond my strength and my knowledge; humble as I am I cannot undertake it: I have neither the necessary knowledge nor the desirable eloquence nor the means to reach such an elevated end.

For such a work, it would be necessary to be supported by the Lord, and by the grace of the Holy Spirit, as the ancient Holy Fathers, who were in the world, thanks to their prodigious works and deeds, like shining stars. A miserable one like me, plunged into the mire of sin, burdened with the heavy load of his many faults, absorbed by terrestrial worries, distracted by the commerce of men and concerned about the ephemeral goods of this life, cannot dare to engage in such an enterprise.

However, to show you my great esteem and consideration of the zeal that you show in defending the orthodox faith, I have collected from the writings of the ancient Fathers, according to the measure of my means, that which can serve your intentions. So receive it with charity and religion, and do not ask me for eloquent phrases and swelling expressions.

I have divided this collection, made for you, into four parts. But you should not read it just for the sake of reading, and be in a hurry to finish it as soon as possible: on the contrary, you will reflect on each part, and you will remember what you can, in order to have an answer. ready for anyone to question you; and so that your reasons are clear, and your belief in God strong and firm. Do not show what I have composed for you to the enemies of your faith; but observe the prescription of the holy Gospel, where it is said, “Do not give the holy things to the dogs, and do not throw your pearls before the pigs, who will tread them and turn against you. The merciful Lord leads to the truth, inspires the good, and helps to obey him and to do his good pleasure in his power and his goodness: that by his very great mercy, he should make it so. Amen.

First part. – Considerations in the Old Testament up to the coming of Our Lord Jesus Christ and his incarnation in Mary’s womb, the pure virgin, the light of the world and the splendour of eternity.

Second part. – Exposition of the faith preached throughout the universe by the Apostles, and the predictions of the prophets.

Third part. – Councils, and those who have needed the celebration; of the origin of evil in the Church, and of dissents in belief.

Fourth part. – Teaching of the ancient Fathers who governed the Church; and an account of what happened in some countries at the time of the schism.