Who is the greatest?

Almost the last words which our Lord Jesus Christ, the Word of God incarnate, spoke to his friends and Apostles, and his last commandment, was that they go into the world and make disciples, or more accurately, that they disciple the world. I think this is significant. He could have told them to go and […]

Therefore said he unto them, The harvest truly is great, but the labourers are few: pray ye therefore the Lord of the harvest, that he would send forth labourers into his harvest. Luke 10:2 I would like us to consider a few verses from the Gospel we have just read together. It seems to me […]

When I was an evangelical it was customary for some who thought they were cool to respond to the question, What Church do you belong to? with the answer, I’m just a Christian! Sure, I knew what they meant. But the question mattered. I was asking which community or congregation they belonged to. I was […]

To be truly human!

The Christian Gospel is the proclamation of the union between God and man, and the renewal of the divine-humanity which Adam abandoned. It is not possible to become that man or woman whom God has uniquely created us to be unless we seek and experience union with God who is true being and the fulness […]

Good News or not?

I am struck by how often people correspond with me who have a wrong idea about Christianity altogether. I don’t mean non-Christians, atheists and agnostics. I mean people who have been brought up in the Orthodox Church and just haven’t understood the Orthodox Gospel at all. Perhaps they were taught by those who had a […]

All things work together for good

Just a single verse. But it is a verse that we should all have kept safe in our heart, ready to bring to mind when we suffer difficulties of various kinds. It says… And we know that all things work together for good to those who love God, to those who are the called according […]

We all have opinions about everything. That’s normal. During the Euro 2016 taking place in France at the moment, everyone has an opinion, often different to that of the referee or the TV commentators. The problem with opinions is that we can give our own views a degree of authority that they do not warrant […] 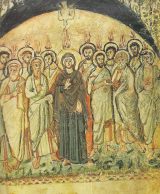 These are the wonderful hymns composed by St Severus, the Pillar of Orthodoxy, for the Feast of Pentecost. Each one is filled with pure and accurate spiritual teaching and is worthy of careful and prayerful reflection. May his prayer be with us all. Hymn 108 Christ, even God, by suffering a voluntary passion On our […]

When we don’t enjoy the Liturgy

I’ve been asked by someone why it is that I seem to enjoy participating in the Liturgy, and even look forward to it, while my friend finds it more difficult to feel the same motivation. I have been Orthodox for 22 years, and there have been times in my own life when I have been […]